BC’s old growth forests are mentioned frequently in the news these days. The forests are important for their biodiversity, which is effectively lost after clear-cut logging. This small brown butterfly, a Johnson’s Hairstreak (Callophrys johnsoni), belongs to an “old-growth specialist” species, and this makes its visit to a garden in Garibaldi Highlands very special as well as puzzling. 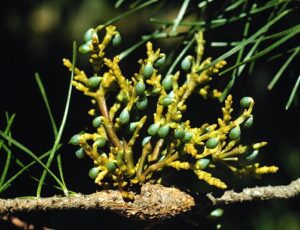 The term “old-growth specialist” refers to the butterfly’s dependence on Western Dwarf Mistletoe (Arceuthobium campylopodum), its host plant. The mistletoe grows high above ground in a few species of old-growth conifers, including Western Hemlock (Tsuga heterophylla), one of our most common evergreens.  It also grows in various pine species, including the Shore Pine (Pinus contorta subp. contorta), where the mistletoe may be found much closer to the ground. Shore Pine is a much faster growing species, and doesn’t live longer than 250 years.  The mistletoe is a greenish-yellow structure above the bark of the tree, while most of the plant is beneath the bark.

When the butterfly takes flight in May, it needs access to mud for water and nectar from flowering plants and shrubs.  In July, at the end of its life, it lays its eggs on the mistletoe. After hatching, the caterpillars feed on the exposed parts of the plant. Each caterpillar spins a cocoon and as a chrysalid hibernates in the mistletoe plant until the next spring.

What’s puzzling about this? An expert on BC butterflies told us that he has never seen a Johnson’s Hairstreak beyond the base of its home tree or stand. He added that butterflies in general don’t travel more than 500 m from their home locations.  This leads us to conclude that there is at least one old Western Hemlock or one old Shore Pine within 500 m of the garden where the butterfly was photographed. The likeliest spot for such a tree is Merrill Park. The forest in the park was logged (for the first and only time) sometime between 1926 and 1949. It is possible that one or more trees were not cut at that time and that they are old enough to have become hosts to the parasitic mistletoe.

The Johnson’s Hairstreak species is red-listed by the BC Conservation Data Centre: this designation is used for species considered threatened or endangered. The danger for this species is created by ongoing loss of potential habitat. Please do what you can to help preserve our old-growth forests. So many species, like this little butterfly, depend on them for survival.